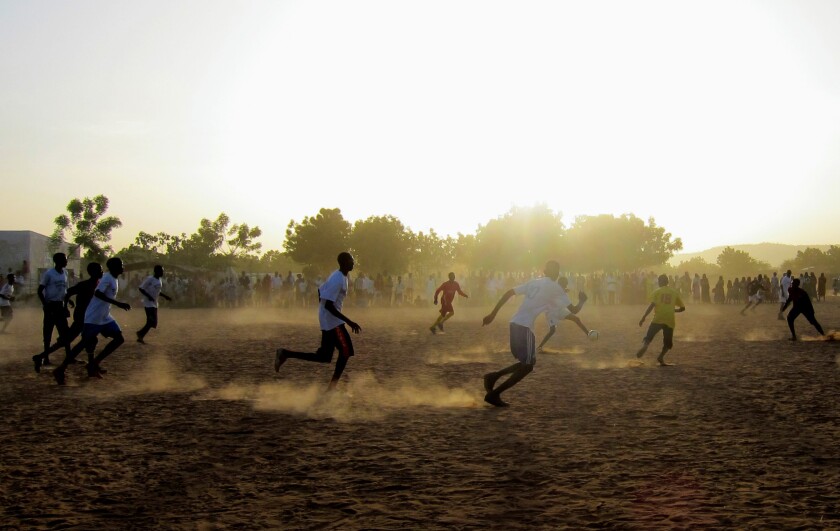 Hello and welcome to the L.A. Times soccer newsletter. I’m Kevin Baxter, the Times’ soccer writer, and we start today in Darfur.

Remember Darfur? It’s the region of western Sudan that was the focus of countless humanitarian campaigns and activist fundraising in the 18 years since war broke out there over land and water rights, killing more than 300,000 and displacing nearly 3 million more, according to United Nations estimates.

But the world’s focus has shifted. Civil wars in Syria and Afghanistan, sectarian violence in Africa and the Middle East, religious persecution in Myanmar and political and economic instability in Iraq, Venezuela, Haiti, El Salvador and Honduras have produced a global refugee crisis of horrific proportions.

According to the United Nations Refugee Agency, at the end of 2020 more than 82.4 million people — 1 of every 95 persons on the planet — had been forced to flee their homes. That’s nearly double the number from a decade ago, when the crisis in Darfur was at its peak.

But Gabriel Stauring and Katie-Jay Scott haven’t looked away. In fact, they’re doubling down on their work with the Refugees United Soccer Academy in Chad, home to an estimated 370,000 displaced Darfuri people.
“We just are not going to suffer from burnout or feel hopeless because we see the real difference that it makes in the communities,” said Stauring, founder of iACT, the Hermosa Beach-based nonprofit that administers Refugees United. “The need for this type of work is not going to end.”
Taking soccer to a place where food, clean water and housing are in short supply might seem like a case of misplaced priorities, but it’s exactly the opposite. Hope is even harder to find in many of the 12 camps where Stauring and Scott work, but the Refugees United academies, launched in 2013, have brought that to the more than 22,000 children who have enrolled in the program.
“These camps are forgotten,” Stauring said. “Food rations are at an unimaginably low rate. And education, they barely get any funding. So this opportunity to have this space where they just experience the joy of football in a peaceful environment and where they are seen as whole people, it’s transformational.


“It’s football. But the life benefits in these camps that are so on the edge go well beyond the sport.”

Read the full article at the Los Angeles Times